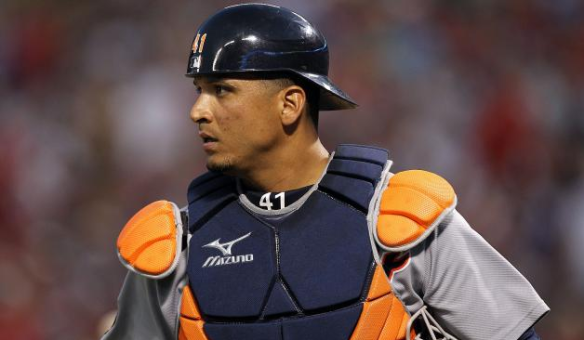 The 2016 MLB season is about a month old, which means that this year’s Detroit Tigers series is off to a bit of a late start. The series title is a reference both to this post, which will examine the Tigers’ catcher options, and to what the team needs to do this season in order to earn a playoff spot in a beefed-up American League Central.

In this 2016 season preview, I wrote the following about the catcher spot:

Saltalamacchia, whose batting history looks like Maybin’s without the peaks that suggest the possibility for something better, will be sharing time at the catcher position with McCann. Despite their apparent popularity with fans, neither hits nor catches very well, so if Mr. I’s foot remains “on the pedal, hard,” and the team is in a position to compete for a playoff spot in July, expect catcher to be a position they look to upgrade. (Of course, should-be third-string catcher Bryan Holaday hit a grand slam while we were putting this preview together, so who even knows.)

Almost immediately after that, Detroit traded Holaday to Texas for another catcher, Bobby Wilson, and a twenty-four-year-old pitching prospect.

Almost immediately after that, McCann, the presumptive starter, sprained his ankle in the fourth game of the season, an injury from which he has yet to return.

Almost immediately after that, Jarrod Saltalamacchia, who came to Detroit in the offseason and was presumed to work mostly as McCann’s backup, began destroying the baseball. He’s cooled off a bit lately, but he’s been doing his best Trevor Story impression as the kid who only hit homers. In his first eight games, he had nine hits, five of which were home runs. His pleasantly surprising offensive performance has raised a question more immediate than the preseason one about finding a new catcher at the trade deadline later this summer: what should the team do once McCann’s healthy again?

The friendly Displaced Tigers Fan also took on this subject a few days ago and framed the issue this way:

Ever since James McCann went on the DL with a sprained ankle, Jarrod Saltalamacchia has been mashing taters like he works at a goddamn Old Country Buffet. Salty leads the team in HR, RBI, and jersey letters, and has made a compelling case for playing time in this opportunity. Whenever McCann comes back from his injury, the Tigers will have a decision to make. More likely than not, they will insert McCann back into the everyday lineup and leave Saltalamacchia on the bench with his curly guido haircut. But should they?

Saltalamacchia treated April the way Justin Upton usually treats August, but the heat’s likely to dissipate, and the Tigers shouldn’t expect too many fireworks from either of these guys’ bats. The offense probably is a push, and, as I wrote in my season preview, I’m with those who see the best approach as using the right-handed McCann and switch-hitting Saltalamacchia in a platoon arrangement.

Here, a brief pause to note that, in their preseason positional rankings, FanGraphs ranked Detroit twentieth-best at the catcher spot. Absence, and the memory of a couple good throws to catch base stealers at second, may make the fans’ hearts grow stronger with respect to McCann, but– a completely unpredictable offensive run from Saltalamacchia aside– there remains little with which to quibble in those rankings.

Here, a further pause to recall the even worse evaluation of the position from Baseball Prospectus:

Detroit’s situation, on the other hand, may be hard to salvage: by over half a win, it’s the worst projection at any position in all of major-league baseball. James McCann, the projected starter, was horrific behind the plate last year, and didn’t really do enough offensively to make up for it. And the backups don’t help one little bit: Saltalamacchia is projected for -6 FRAA behind the plate next year, and Holaday for -2. Neither hits much either, and both are on the wrong side of the aging curve. And so, in amongst the worst position-division projection in baseball—catching in the AL Central—Detroit is in quite clearly the worst situation. So, what have we learned? In . . . Minnesota and Detroit, things look bad all around. Disaster comes in many forms, and this year in baseball it’s more likely than anywhere else to come to the backstops plying their trade for the American Midwest’s junior teams. And Detroit—as has been true in the broader American life these last decades, as well—has been hit the hardest.

With low overall expectations and the unlikelihood of either catcher distinguishing himself from the other on offense, is there any chance that one of them can set himself apart with defensive skills? It’s not looking great on that front either.

Last year, McCann and Saltalamacchia were among the very worst pitch framers in baseball. (Recently former Tigers Holaday, Alex Avila, and Brayan Pena were down there with them, so no need for transaction remorse on these grounds.) Both were roughly average blockers in 2015.

McCann’s arm has been a bright spot in his otherwise unremarkable-to-very-not-good profile. Only Russell Martin, Yadier Molina, Derek Norris, and Wilson Ramos added more value than McCann last year by throwing out base-stealers, and Saltalamacchia was a negative in that department. Runners nevertheless were testing McCann in his early season appearances this year, and he was throwing them out at an eighty-percent clip.

My initial plan had been to compare these two much earlier in the season, but, in light of Saltalamacchia’s mini-breakout on offense, I’m glad I waited. McCann’s ability to control the running game likely justifies his return to the primary catcher position. While Saltalamacchia has earned himself more future plate appearances in McCann’s absence than he likely would have otherwise received, I still think a platoon is the way to go. Neither is likely to be special on offense over the remainder of the season, and McCann’s ability to throw will only take him so far, especially when balanced against a lack of framing skills that leaves him as a net negative on defense.