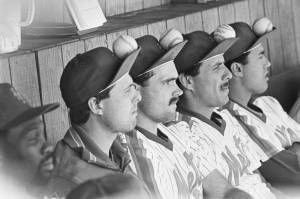 You’d see guys toward the end of a game, maybe getting ready for their final at bat, double-back into the locker room to chug a beer to “re-kick the bean” so they could step to the plate completely wired and focused and dialed in. They had it down to a science, with precision timing. They’d do that thing where you poke a hole in the can so the beer would flow shotgun-style. They’d time it so that they were due to hit third or fourth that inning, and in their minds that rush of beer would kind of jump-start the amphetamines and get back to how they were feeling early on in the game—pumped, jacked, good to go. How they came up with this recipe, this ritual, I’ll never know, but it seemed to do the trick; they’d get this rush of confidence that was through the roof and step to the plate like the world-beaters they were born to be. … Read More