What’s with all the newsletters? Last week, I wrote about Bill Simmons’ new, post-Grantland website, The Ringer, which launched not with a splashy homepage prepopulated with articles, but with an email newsletter. Over a week later, TheRinger.com still exists as a simple placeholder page with little more than a button for subscribing to that email newsletter and podcast download links. As of this afternoon, Simmons & Co. have released a total of six newsletters.

Two days ago, FanGraphs announced that it too would introduce an email newsletter, and, later that day, the first issue arrived: 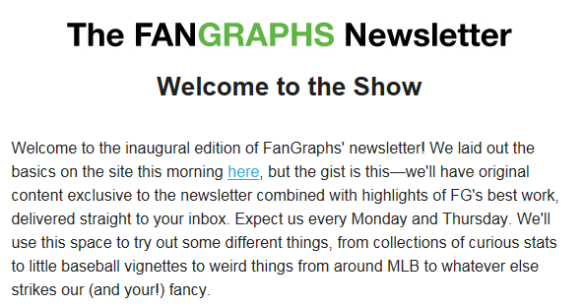 The FanGraphs newsletter promises “original content exclusive to the newsletter combined with highlights of FG’s best work.” The “exclusive” content in that first newsletter constituted a paragraph on the Adam LaRoche mini-saga and a Manny Machado GIF. The substantive remainder was comprised essentially of links to FanGraphs posts from the past week. I certainly am not opposed to weekly roundups from the FanGraphs family of websites, but, unless FG plans a significant expansion of the exclusive content in its biweekly newsletters, it’s difficult to understand the purpose of introducing a newsletter, especially when the site already runs a weekly “Best of” post every Saturday. Unlike The Ringer, FanGraphs, along with its component sub-sites RotoGraphs, TechGraphs, The Hardball Times, and FanGraphs Community (R.I.P. NotGraphs), has been in full operation online for years, making it unclear why the site would now decide to exclude original content from its website and bury it in an email newsletter.

Just this afternoon, Deadspin joined the fray, announcing that it will have an email newsletter as well:

Hey! We have a newsletter now. We promise it's not shit. https://t.co/IkZlYLsQyx

The only information the Gawker Media sports site provided on its new offering is that “the top stories from Deadspin [will be] delivered to your inbox.”

What’s going on here? In 2016, the idea of starting an email newsletter sounds as outdated as that chain email your great aunt forwarded you from her AOL.com account that’s been circulating the internet since 1998. Sending and receiving email may be easier than ever before, but people are using email less and less, and more of it than ever is straight junk. (Fully one-third of the email sent to the U.S. House of Representatives is either malware, viruses, or spam, for example, and that doesn’t even include your great uncle’s daily missives explaining to people who aren’t his elected representative the ways in which the CIA is using its top agents to stalk him at the supermarket.) Who wants more email?

The only reason I can think of for this sudden expansion (at least as perceived by me) of email “newsletters” is that, in actuality, they’re a very basic form of email marketing.

Most websites make money by hosting advertisements on their pages, but the proliferation of ad-blocking applications and software has substantially decreased the value of those advertisements. (According to one recent report, between August 2014 and August 2015, ad blocking cost web publishers $22 million, with U.S.-based ad blocking rising by forty-eight percent during that period.) Ad blockers make it difficult for websites to convince potential advertisers that their sites will deliver a certain number of viewers to the advertisers’ advertisements. A list of email newsletter subscribers may be a more robust offering, however, and don’t think that email marketing companies can’t provide their clients with data on recipient interaction with those email “newsletters.”

I hope to gain more insight on this from people with real marketing experience, but my sense is that there are two reasons why an email subscriber list would be more valuable to a website than conventional pageview data: 1) by definition, a list of email subscribers is a list of people who were interested enough in the website to take the affirmative step of signing up for the site’s email newsletter, and a collection of (even minimally) engaged users surely is more attractive to potential advertisers than aggregated, coarse-grain counts of drive-by webpage viewers, and 2) ad blocking on in-email content is far less pervasive, if it exists at all; in other words, it’s one thing for an email client to identify an entire email as spam and divert it from your inbox, but emails you asked to receive are going to make it to you, and so will the commercial messages contained therein. A final point that’s obvious and practical is that email newsletter subscriber lists, like print-media subscriber lists and telephone-number lists, can be sold wholesale, thereby offering advertisers a direct channel to your email inbox with (maybe) some increased hope of evading spam filters and ad blockers.

ALDLAND has long been ahead of the curve, of course: we’ve had that email subscription button on our homepage since day one.

2 thoughts on “Extra! Extra! Read all about what you’ve already read!”