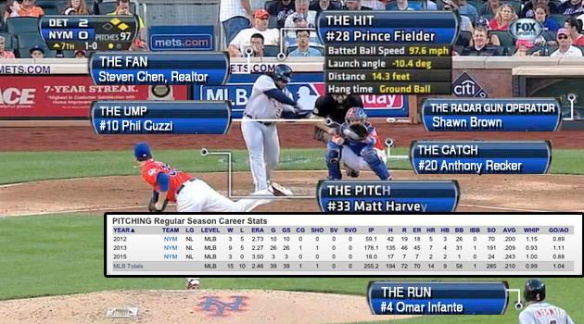 If your neighborhood baseball nerd is nerding out a little more than usual today, it’s probably because Pluto’s in retrograde right now or something, and it definitely doesn’t have anything to do with tonight’s television broadcast debut of StatCast, which will go far beyond showing balls and strikes by tracking things like player movements and batted-ball data. Ben Lindbergh has a good preview of the technology and its chief implications for expanded baseball analysis here.

The Chicago Cubs played the Pittsburgh Pirates last night. After the game, the Pirates released a statement:

During the top of the second inning, a female fan was struck in the head with a foul ball. After initial treatment by PNC Park and Pittsburgh EMS personnel, she was placed on a stretcher, moved to a nearby ambulance and brought to the hospital for further treatment. She was conscious and alert at the time of transport, graciously thanking her caregivers while giving a “thumbs up” gesture to nearby fans. Our thoughts and prayers are with her. We will share additional information as it becomes available.

If you would like to look, here is video of the Starlin Castro foul ball that struck the fan.

Although MLB is treating tonight as the big night for StatCast, the technology behind it has been around for a few years, StatCast itself has been seen in limited action in video available online, and, beginning this season, some of the expanded data has been made available to the public. While there really isn’t enough data to offer fans meaningful context for the newly accessible numbers, they still can ooh and aah at the big numbers in the meantime.

If they even think about it at all, current players probably like things like StatCast. Not only does a deeper understanding of the game drive fan engagement and support their sport’s popularity, and presumably their collective salaries, expanded ways to measure player skills should allow agents to make stronger cases for players who add value in ways other than the most visibly obvious.

Still, for all the excitement surrounding StatCast, tonight is at most a waystation on the path to even more expansive biometric data collection and monitoring. It is inevitable that such collection and monitoring will not be confined to the diamond, court, field, or rink. Being on-time for games, practices, and weightlifting isn’t enough when technology makes ’round-the-clock monitoring possible and useful. Some players already are sleeping in hyperbaric chambers, while others are having surgeons take power drills to their faces to improve sleep quality, and thus, in-game performance. Employers that provide employee health insurance emphasize healthy-living habits designed to reduce employer premiums, sometimes including incentivizing the twenty-four-hour use of advanced pedometers. Why wouldn’t sports teams, for which the health of their employee-players is directly tied to on-the-job productivity, also require players to subject to 24/7 biometric monitoring? Even if health and employment laws prohibit employers from mandating participation in a constant monitoring program, the highly competitive nature of securing a place on a professional team likely would pressure and incentivize players to waive their rights and voluntarily participate.

This excellent article addresses this subject in the NBA context. Ten years ago, primitive BlackBerries helped bring down whatever tenuous barricade existed between the work and personal lives of Capitol Hill staffers. Today, souped-up Fitbits have the potential to erase any similar barrier that exists in the lives of professional athletes. Michael Jordan’s “‘flu’ game” may, figuratively, be a thing of the past.

Detailed public disclosure of athletes’ athletic activity is, to a reasonable degree, to be expected; after all, they’re highly compensated, salaried folks who signed up for this gig and collectively bargained for the terms of their employment.

Fans typically find themselves in a somewhat different position, however. Sure, they ought to know that, when they attend a game, they’re in a public place and other people might see them. It’s one thing to be seen on the jumbotron, or even on a television broadcast of the event. It seems like another thing for a fan qua fan to be subject to public analysis, however. Sometimes it can work to the fan’s benefit, and there are reasonable exceptions when a fan, by his actions, involves himself in the game, but, particularly when something bad and unexpected happens to a fan, further analysis of the situation can feel like an improper invasion of privacy.

We’ve mentioned litigation between baseball teams and fans hit by foul balls before, but the purpose of this post is not to offer a legal analysis. Instead, the question is whether fans and the media ought to use new sports data-gathering technology to learn more about other fans, like the one hit by the foul ball last night in Pittsburgh. The now-available batted-ball data allows us, the public, to learn more about the severity of what happened to that fan than we would have been able to know with any specificity even a year or two ago. In particular, we now can tell how fast the ball left Castro’s bat, which is a different and faster speed than that at which the incoming pitch crossed the plate. Given the proximity of Castro’s bat to the netting behind home plate and the proximity of the fan’s head to the netting, this speed will be close to the speed with which it struck the fan’s head. If you would like to know that speed, it is available at the bottom of this page.

All that distinguishes this piece of information in my mind is that it is newly available. Our natural desire to know more about an injurious event seems both unavoidable and reasonably harmless. How fast was the car going that hit her? How big was the dog that bit him? This sort of information helps us understand and process tragic occurrences, and the batted ball speed really is not different in this regard.

Beyond these basic event circumstances, the only thing most people want to know is whether she will be alright. This reflects an appropriate limitation on the public inquiry. Unlike, potentially, the professional athletes of the future, we do not ask– nor should we ask– fans to wear biometric data trackers that sync with the sport’s data infrastructure. Information about the circumstances of this fan’s recovery belongs to her. We have no legitimate claim to it.

The on-field impact of StatCast may prove limited, and teams themselves actually may seek to limit data gathering and sharing, at least of the public variety. Whatever its ultimate impact, though, StatCast looks like good, clean fun for fans of all sorts, and it can operate without inappropriately invading the province of the fans.

5 thoughts on “The moral implications of StatCast”