Last night, the Tigers traded two of their top pitching prospects, Corey Knebel and Jake Thompson, to the Texas Rangers in exchange for reliever Joakim Soria. My immediate reaction was that Knebel and Thompson were a steep price to pay for Soria (or virtually any single relief pitcher), but two realities likely drove up the price: 1) in general, it’s a sellers’ market, because league-wide parity (some might say mediocrity) at this point in the season means there are more buyers than sellers as we approach the main trade deadline, and 2) everyone knows the Tigers need bullpen help and therefore have Detroit GM Dave Dombrowski a little bit over a barrel when it comes to negotiation leverage. However you weigh the trade pieces here, Detroit had to make a move like this if it wanted to contend this October, and the equities certainly are not as imbalanced as they were in some of the Tigers’ preseason moves.

Soria is a thirty-year-old relief pitcher who was born in Mexico and spent the first five years (2007-2011) of his career in Kansas City. After sitting out all of 2012 while undergoing Tommy John surgery, he joined on with the Texas Rangers in 2013. While a glance at his numbers suggests that he picked up in 2013 where he left off in 2011 (in a hitter-friendly park in Arlington), he has been absolutely excellent so far in 2014.

I’ve had my eye on Soria since he popped up in serious trade rumors in the past week or so, and I haven’t found much to dislike about him. First, here are two early reactions to this trade:

#Tigers fans, here's my take on Soria, the best reliever in baseball in 14 (FIP) from June. pic.twitter.com/DeswhlDtW9

Last week, I ran a statistical comparison of Soria and the man he ought to replace in Detroit, current closer Joe Nathan. As you might have guessed from reading Kapler’s comments, the upshot is that Soria has been better than Nathan in every statistical category (with the minor exception of LOB%, which is a little too context-dependent for the purposes of this comparison, and the difference between the two is minimal) in 2014, sometimes by a lot. Another thing to notice, though, is that it hasn’t always been that way. 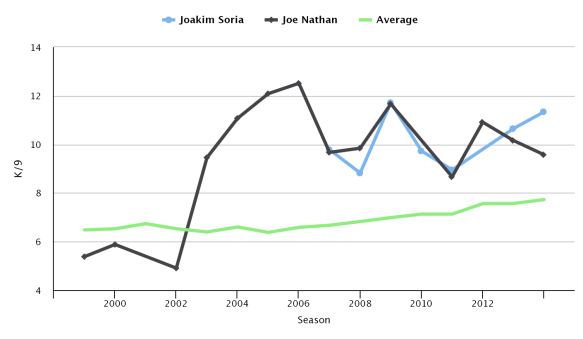 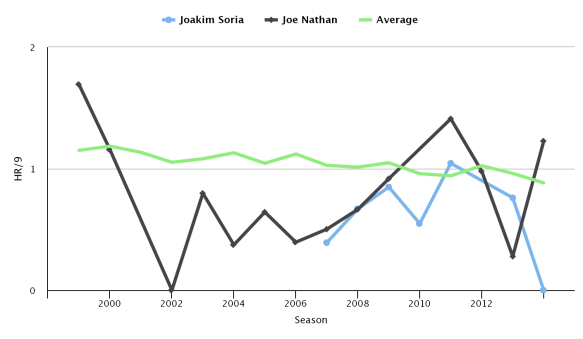 While this move obviously is short-sighted, it will be interesting to track whether Soria’s outstanding 2014 represents a developing trend or an outlier going forward.

As a final note on the Soria-Nathan comparison, these two aren’t strangers to each other: Soria served as Nathan’s set-up man in Texas in 2013.

The seventh and fifth-best prospects, respectively, in the Detroit system, Knebel and Thompson were a high price to pay for Soria. As Oakland Press beat writer Matthew B. Mowrey points out, though, these are exactly the sort of prospects Detroit drafts and develops for exactly this purpose:

A large part of the reason the #Tigers draft the way they do is to get fast-risers who can be flipped in trades. (1/2)

Look for Detroit to make a trade for another relief pitcher prior to the July 31 non-waiver trade deadline. If they complete a third transaction, my guess is that it will be for an outfield bat.

4 thoughts on “Flying Tigers: Detroit finds relief, but at what price?”