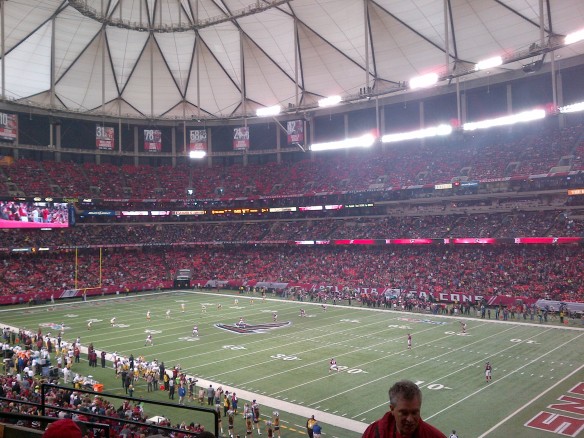 As reported, I was on hand to watch the Falcons host the Redskins (Monuments?) yesterday afternoon, and it was everything you’d hope a late-season pairing of three-win teams would be. Atlanta’s offense was boring but effective in the first half, relying primarily on Steven Jackson, back in action after an early season injury, and Tony Gonzales, who in the second half became just the fifth NFL player ever to tally 15,000 receiving yards. On the other side of the ball, Kirk Cousins’ performance was a mixed bag. Against Atlanta’s soft defense, Cousins posted better passing numbers than Robert Griffin III– spotted wearing warmups on the sideline– has this season, but a couple of interceptions proved costly. Washington nevertheless was in a position to take the game to overtime, or win it outright, thanks to a late touchdown that ran the score to 27-26. Opting to go for the regulation kill on the road, Mike Shanahan made like Brady Hoke and called for the two-point conversion, which failed. Atlanta recovered the sloppy onside kick to seal the one-point win.

Having read about far more NFL games than I’ve attended, the game experience was a bit odd. Even taking into account Atlanta fans’ reputation for lacking a feverish commitment to their teams, the vibe was beyond mellow in the Georgia Dome on Sunday. The noise level was somewhere between a Braves game and the Masters. One fan in our section who caught a free t-shirt used it as a pillow to rest. Another took a nap without similar support. And these weren’t alcohol-induced rests– the only even semi-drunk person we saw was a mom indulging in too much smuggled adult fruit punch– it really was that quiet. Our entire row, and most of our section, including the man pictured above who stood with his back to the field and wouldn’t get out of my picture even though I didn’t ask him to, left before the end of the third quarter, when the Falcons led by only four.

We didn’t find any of this upsetting, and our people-watching experience was further enhanced by the skilled camera operators feeding the nice video boards with fun fan shots. (The ushers probably could stand to lighten up a bit, though. 3-9 vs. 3-9 in December deserves a lighter touch from the regulatory folks.) 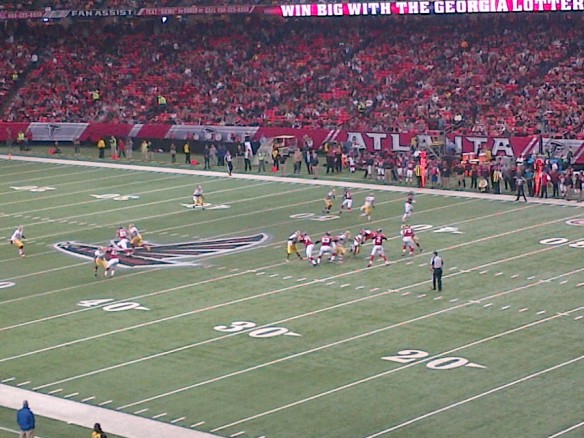 It’s been about twenty years since I’ve attended an NFL game, so I don’t know what the average fan experience is like around the league. I expected a little more attentiveness and activity simply because it was the NFL, but I’ll take a relaxed section with a good view over a too-rowdy, overserved alternative just about every time.

Maybe it’s because I’ve paid more attention to the college game in recent years, but I haven’t quite developed a full understanding of extreme fandom in the NFL setting. In a region where college football is king, perhaps that partially explains the tinge of ambivalence in the Falcons’ fan base. Or maybe it’s swinging from Super Bowl contender to draft pick contender in less than a year. It’s probably that.

Lots of Falcons fans want the team to lose in order to improve the team’s drafting order, the goal being to pick defender Jadaveon Clowney. Atlanta badly needs help on defense, and picking Clowney may be the quickest way to begin to address that need. Clowney alone cannot fix this team’s problems, though; no single player could. Circumstances will be different next year. They should be better– Julio Jones and Roddy White should be 100% healthy– but other problems may befall the team, and who’s to say Clowney, who seems likely to have a long and successful NFL career, will be an impact player as a rookie? I don’t quite have the passion against supposed dispassion that drove Drew Magary’s anti-fantanking screed; I just think it’s better to root for your team than against it, and I’m glad we got to see the Falcons win on Sunday.

As this post moves toward disorganization two final thoughts:

Would general manager Thomas Dimitroff, whose daring trade for receiver Julio Jones doesn’t look great today, trade up to get Clowney? It can’t be ruled out.

The move to acquire Jones is bad because Jones spent most of this season on injured reserve? Jones had an extremely good 2012, and the combination of him, White, Jackson, and the emerging Harry Douglas could once again make Matt Ryan look like he deserves his $104 million contract in 2014.