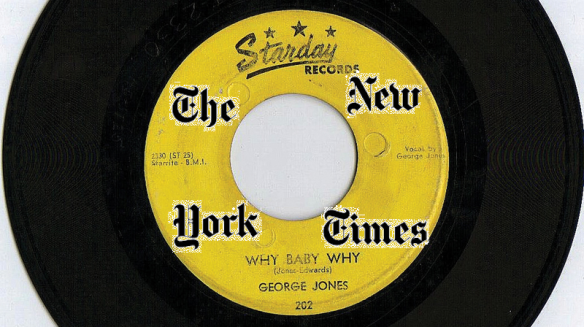 The New York Times has been flirting with Nashville for years, joining the charge of northern and coastal publications eager to tag Music City as America’s newly discovered “It City” with multiple travel-section features and other glowing profiles. They even utilized Vanderbilt basketball player Joe Duffy as a sports columnist during Duffy’s senior year.

All of this praise and proclamation certainly drew Nashville’s attention. A sudden object of affection rightly wants to know that its new, putative suitor’s interest is real, though, and a period of trouble or difficulty can provide a means of testing the authenticity of that interest. If the suitor’s interest is genuine, it will respond in a way that demonstrates true understanding or, at the very least, in a way that seeks to gain that understanding, so as best to further the relationship. If it responds by turning to cliches and shallow “conventional wisdom,” though, it suggests the interest was only ever skin-deep.

I’m not suggesting that the New York Times owes Nashville, or Vanderbilt University, any special degree of care or deference. That’s especially so where, as here, the issue is a rape allegation, and one that describes a single victim with multiple alleged perpetrators at that. (To say that rape is a topic beyond the scope of this website a) is true; b) is not to signal that it is a topic that people should not discuss; and c) is not to say that the integrity of a sports team as such is the more important issue here.)

I am suggesting that the New York Times owes Nashville and Vanderbilt University a duty of ordinary journalistic practices, which include researching stated assumptions instead of treating general stereotypes as established fact applicable to the matter at hand. I also am suggesting that the New York Times did not meet that standard in an article about Vanderbilt University’s football program it published today. (HT: Johnny Too Bad.)

As with most good headlines, the one on this article– “New Heights and an Unsettling Low for Vanderbilt Football”– encapsulates the conceit of the piece. In short, that long-running trope that likely originates from a time even before Jimmy Johnson’s Miami Hurricanes, college sports’ version of the national security-civil liberties tradeoff fulcrum, that recruiting athletic talent necessarily implies recruiting trouble, finally has come to bear upon the once-pure, and (almost) perennially losing, Vanderbilt.

The rape accusation “was the uncomfortable backdrop to another football season,” author Greg Bishop wrote for the NYT, “the contrast between the unexpected heights the program has reached under Coach James Franklin and what has been described as the most serious criminal charges ever leveled against Vanderbilt athletes. For once, the unease was not about how bad the Commodores would be but about how good they had become — and at what cost.”

The meaning of that last sentence is clear: increased player misbehavior is a correlated cost of improved athletic performance.

Bishop sets out the basic backdrop and launches the arc of his woven storyline:

For decades, Vanderbilt football and its fans could claim the moral high ground, especially in the SEC. The university was not simply an extension of the football program, it was argued, and if that meant so many losing seasons and confounding losses, then so be it. Vanderbilt was the so-called Harvard of the South.

In two short seasons, Franklin seemingly obliterated the notion that Vanderbilt could not have success in football and academics. He won big and often and against teams with more tradition and greater resources. His best player, receiver Jordan Matthews, held a news conference to announce his decision to skip the 2013 N.F.L. draft and graduate instead.

Then the arrests came.

Bishop has to admit that “scant evidence surfaced that Vanderbilt had relaxed its standards to admit football players of questionable character,” so he casts his line in search of another target, finding an insufficiency of alumni outrage to be the next problem. And the fans, who, he wrote, “shelved that sentiment [that a “real criminal scandal” was occurring] momentarily” so they could watch the team’s first game last week. And the media, who didn’t ask Franklin about the rape allegations after Thursday’s game.

Nevermind that local, regional, and national media have been covering the story since before it was officially announced, or that Franklin, Bishop again must admit, suspended the accused players from the team at his earliest opportunity.

Nevermind that alumni have responded with a demand for attention to the allegations by the football team, rallying around the open letter by Robert Funke ’09 to the university that focused the attention of young alumni who, because they find themselves perhaps less geographically concentrated than those from other schools, connect more often online than on the university administration’s doorsteps (and who, if we’re playing by the rules of the common story arc, don’t exactly have a lot of practice being alumni connected to a successful football team).

Nevermind that it’s very possible that fans attended the game without bracketing the subject of rape, that they chose to support those players who had nothing to do with the alleged rape, and/or that they attended with conflicted hearts and conflicted thoughts but also with the belief that sports contained a positive, developmental capability as well.

Bishop appears dead-set on refashioning Vanderbilt’s black and gold star into a scarlet letter: “At the start of the new school year, volunteers helped students move in. The group included freshman football players, clad in their Vanderbilt jerseys. Perhaps this was simply a sincere welcome gesture, same as in years past, but it struck many fans, even rabid ones, as tone deaf.” I’m not saying fans, “even rabid ones,” didn’t find the decision to try to create a positive and helpful bond between athletes and non-athletes to be “tone deaf” under the circumstances, but 1) it isn’t obviously “tone deaf,” and 2) while I don’t claim to have a finger on the pulse of the VU fanbase, I heard of no such outrage. Bishop doesn’t quote, or even mention the names of these fans, but the technique allows him to insert disapproval of the decision without claiming it for himself or having to explain it. Maybe it was an obviously bad choice, and maybe I’m a “rabid” fan of an SEC football team who’s being willfully ignorant. Or maybe there’s something about mountains and molehills that makes these anecdotes feel, at the least, forced.

Bishop wants someone at the university to be fired. Maybe he thinks football games should be cancelled.

In what sounds like his perfect tagline, he writes: “The rape case against the football players is likely to continue throughout the season, and each new development will prompt another round of headlines. Meanwhile, another trial, fair or not, will commence. The defendant: Vanderbilt athletics.”

The article continues to wind down to its actual end, though, and in the final two sections, Bishop buries the voices that buck his story arc. One is Hunter Hillenmeyer, a Vandy linebacker who was with the Chicago Bears from 2004-2011, and told Bishop, “I haven’t seen a single piece of evidence that Vanderbilt was relaxing its standards. I don’t see any correlation. I think that’s ridiculous.” The final section of the article is a paraphrase of Funke’s open letter, linked above.

Absent much more than hearsay, it’s not very practical to write about or dispute whether an alumni base is responding adequately to a particular incident, or whether the media is addressing the situation appropriately based on the questions asked and not asked at one press conference. For what it’s worth on the former, Funke is continuing to lead in a smart and informed manner, as again evidenced by the follow-up piece he posted online this morning.

While today’s New York Times article is fuzzy on what possibly relevant people in the Vanderbilt community actually are thinking and doing, it’s difficult to ignore the implication that this is all the fault of Franklin, who just so happens to be the school’s first black coach. The components of the syllogism at work here are that, to win, football teams must include some players likely to engage in criminal activity; Vanderbilt became a winning football team when Franklin arrived; and Franklin brought these wrongdoers to campus, sacrificing Vanderbilt’s reputation upon the altar of football success.

But Bishop does not ever ask whether there is, in general or at Vanderbilt, a connection between recruiting and disciplinary problems. It seems like an important question to ask, and to answer it, he would not have had to do much original research. Anchor of Gold’s Christian D’Andrea looked into that very question this summer, right after news of the rape allegations broke.

It may just be a fallacy connected to how fresh these memories are for Commodore fans, but it certainly seems like discipline has become a bigger issue in recent years than in years past.

It’s been easy to dismiss the recent string of problems as a kind of “good football tax.” Vanderbilt had been the SEC’s cleanest program for years, but also its least respected on the gridiron. Meanwhile, programs like Miami and Florida had developed into perennial title contenders despite dealing with off-field issues that threatened to derail their promising seasons. Was there a connection between the quality of player that a program can bring in on the field and their propensity to wind up in trouble off of it? Are discipline problems an unfortunate side effect of success?

D’Andrea then compared publicized cases of player discipline between 2011 and 2013, a period in which Vanderbilt had three head football coaches. While Franklin undoubtedly has brought more highly touted players to Vanderbilt in his two years on the recruiting trail, D’Andrea’s analysis indicates that “Franklin’s recent success with high school athletes hasn’t been a factor in the school’s recent disciplinary record.” Because half of the current team is comprised of players recruited under VU’s two prior coaches, Robbie Caldwell and Bobby Johnson, D’Andrea’s caveat that it simply is too early to know whether the recent incident is an aberration or a trend for Franklin’s tenure is one Bishop and other national writers should heed as well.

Plus, anyone who actually had spent any time with Vanderbilt athletic director David Williams would know that, while he undoubtedly is under great strain as a result of this issue, he always looks exhausted and disheveled. The man works, or has worked, approximately thirteen high-ranking jobs for the university, many times simultaneously.

Vanderbilt is a great research institution, and its community would benefit if the New York Times was too. For the time being, they shouldn’t expect any love letters from West End.