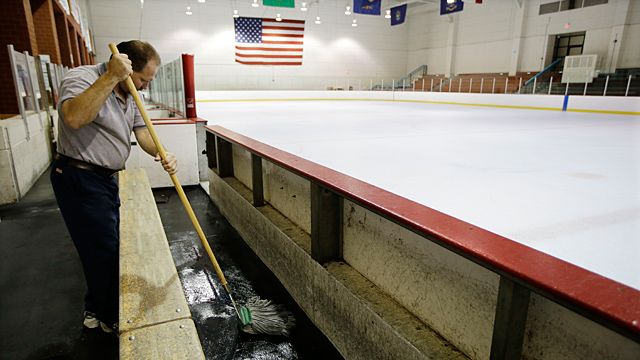 What I miss most about hockey are the different ways things look, and the different ways things sound. There is nothing in sports like walking out into an arena in which everything is dark except for the gleaming sheet of ice below. Nothing sounds quite like the hiss of the blades, and the different sounds of the different tiny detonations — a puck onto a stick, a puck onto the glass, a puck onto the boards, a body into the boards — that make up the action. They are all sharp and varied, like the argumentative calls of exotic crows. What I miss most about hockey are the many ways it is so different from everything else. Everything is so damned vivid. This is, of course, only part of the reason that NHL commissioner Gary Bettman needs to be rendered naked, smeared with honey and jam, and dragged behind a Zamboni across an endless field of anthills.

I am not even the greatest of hockey fans, but I know this one thing: Outside of NASCAR fans — who are outliers in so many ways, including, alas, which way many of them would have been rooting at Gettysburg — hockey fans have a more intimate relationship with their sport than do any other fans. Their devotion to the game as a game is more enduring than that of most football fans, and it is far less insufferable than that of most baseball fans, the latter of which, I believe, would be content if the games were contested on spreadsheets by columns of inhuman figures. (A large percentage of football fans also prefers to look on the games as columns of figures, most of which end, oddly enough, with “-10,” or “O/U 65.”) In certain parts of the country, like, say, the Boston area, in which I grew up and I live right now, hockey fans follow the collegiate and professional levels with equal fervor — as opposed to basketball fans with their endless, stupid arguments about whether or not the college game is superior to the NBA version — because, in both cases, you’re simply watching hockey, which is all that matters. … Read More