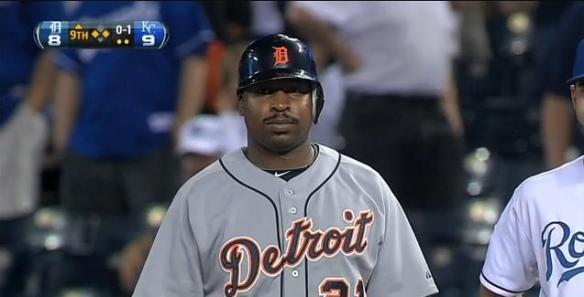 In a span of 11 batters over the first and second innings Tuesday night, the Royals got more hits off Justin Verlander than they’d ever gotten off him in a game.

In that same span, they scored seven runs — more than they’d ever gotten off Verlander in a game.

Detroit rallied, tying the game on a Jhonny Peralta home run in the eighth, but Phil Coke, who has been ineffective on the road, gave the lead right back in the bottom half of that inning. The game effectively ended in the ninth, when officials ruled that a Delmon Young drive to the right-field seats wasn’t a homer. It would’ve scored three for the visitors. (Watch the video here, second clip on the right.) That’s Young, pictured above, as he stood on first awaiting the review. He has a mustache now, which I did not know/remember until this morning.

After the way last night’s game and the month of August has gone for them, there’s little more I can add about this team right now, except to present some numerological reality and then get out.

On August 1, Detroit was 2.5 games back of division-leading Chicago, and 1.5 games out of the second AL wild card spot. Today, August 29, they stand 2 games behind the White Sox in the division, and they’re out of the second wild card spot by the same measure. Marking time in May is alright, but doing so in August is disheartening, because these once-(if momentarily) lauded Tigers are running out of time. With just over a month left, the fact that their remaining schedule is fat with games against relevant opponents like Chicago and Oakland and alleged weaklings like Kansas City feels like a mixed blessing at this point.

I can’t give up on this team, but they’re wearing me out, and I’m not going to stay up late for their games again this season, unless they’re playing in October.