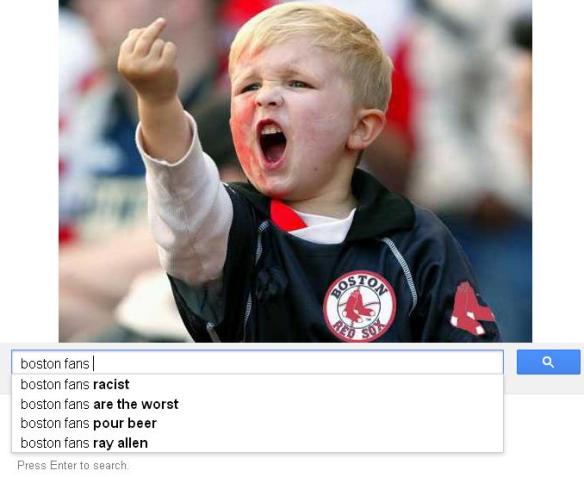 With apologies to bdoyk, the following is an unscientifically rigorous assessment of the Boston sports scene, which is unequivocally lame.

Let’s start with baseball, because I think that’s where a Boston fan would want to start. The Red Sox’s (see, even that possessive spelling is stupid) identity and popularity was built around decades of losing. Or, really, not winning. Playing in the stacked AL East, their teams frequently were very good, they just hadn’t won the World Series in a long time. They wanted to be like Chicago’s lovable losers, maybe(??), but they couldn’t even lay claim to that as a factual matter because, before the Bosox (awful) actually won it all in 2004, both Chicago teams had longer World Series droughts. Pre-2005 You can be forgiven for not knowing that, though, because the Boston fans shouted about their loserdom until you couldn’t remember anything else. Perception was reality. Although none of this started then, they seem to have been particularly adrift since that 2004 win.

I think what I might be getting at here is a sort of woe-is-me attitude that pervades the fan base, except it’s angry, offensive (as opposed to defensive, but it’s offensive in that other way too), and celebrated, rather than sad and bitter, although those things are there too. Really, what’s pervasive is terribleness, and I don’t care to dissect it much beyond that.*

Turning to basketball and the Garden that Larry Legend built– forget Bill Russell (seriously, isn’t it a little weird how much we forget him?)– a few thoughts:

What’s next? Foxboughorough? The Pats?!!? Merely the only dynasty of the last decade-plus in the most popular sport in America. Yet somehow it feels like a fricken emotional roller coaster every season with these guys. Tom Brady (a “Michigan Man”) is a hardscrabble sixth rounder. Right. He’s also got a glass knee, a Bieber haircut, and a supermodel wife. And Teddy Bruschi, the sort-of Willis Reed of our generation, can take a leave of absence from ESPN whenever he’d like.

Anything else? Soccer? Pass, except to note that Bostonians love soccer because it’s the ultimate underdog/non-underdog of sports: wildly popular in two major respects (#1 in the world, and every single American suburban kid played it too), yet Boston still both perpetuates and rails against its perception of unpopularity while wearing Patriots soccer scarves. Lax? Please. Maryland laughs at you, Massachusetts, and Marylanders regularly dress like this. Puck? Post-Orr/Esposito, the best the boring Bruins have managed is amateur Tea Partier Tim Thomas. Of course Boston hates its goalie for political reasons.

The #RedSox mess is on the owners. Bobby & the players went into this w/their eyes open. Ownership seems not to have. Doomed from the start.

It was while I was in college in New England that I came to appreciate the Yankees-Red Sox rivalry, “appreciate” being defined to exclude “like” and “enjoy.” My conclusion then was that while I didn’t like the Yankees as an organization, it was the Red Sox fans who were insufferable. With a serious, widespread, public (i.e., loud) superstitionism among them, you can’t even watch a game with that group. I mean you can’t. And as indicated by the above tweet and the text above that, the attitude of Boston’s fans and media has infested its players. The latest and greatest example is the Red Socks’ clubhouse (note to broader baseball community: can we call it a “locker room” like the other sports?) this season and last. The only actually great parts about that story are the beer and fried chicken, because those things are inherently great. The rest is textbook Boston Lame. I could fill this paragraph with links to the latest blowup or labor through an explanation of why pitching, rather than the manager, is to blame for the team’s struggles, but I’m not going to do that because it isn’t worth spilling another drop of digital ink on a hyper-over-hyped story about what amounts to nothing more than a bunch of whiners. The current Red Sox story isn’t so much a microcosm of The Boston Lame as it is merely the most recent example.

Also, it probably needs to be said that Boston fans have a racism problem.

Do your worst, Boston. It’s what you’re best at.

*I’m not a social scientist, and I don’t believe in the fundamental tenets of many of the social sciences (e.g., anthropology). It’s tough to put a finger on just what characteristic or set of characteristics makes Boston fans lame. What kills me most about writing this is knowing that some kid is going to earn his sociology degree from UMass on the strength of a “scholarly” analysis of the conundrum and psyche of the Boston fan. Oh wait.