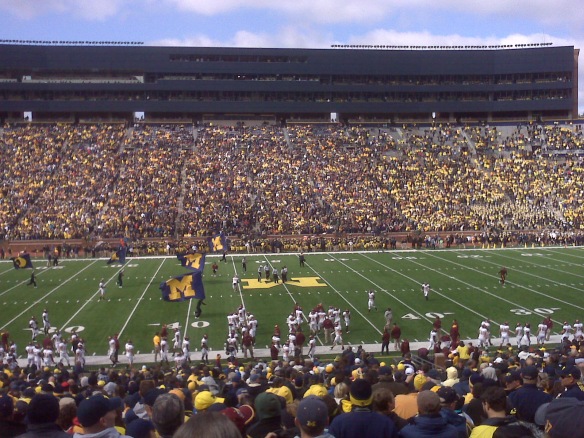 After opening up the college football season with Vanderbilt, I opened big Ten conference play in Ann Arbor last Saturday, where Michigan took a vice-like grip on the Little Brown Jug, beating Minnesota 58-0.

Across the state, the weather had been somewhat crummy all week. I got into town on Friday night hoping to watch Game 1 of Tigers-Yankees. I thought I might’ve seen snow in Ann Arbor, but everyone saw rain in NYC, necessitating a suspension of that game after about an inning of play. Our Saturday-morning tailgate (for a noon game) was a cloudy windstorm punctuated by grilled bratwurst. It turns out that those are the best kind of windstorms. Even better was that things calmed down and the sun came out just in time for kickoff.

I cannot immediately recall a more one-sided game between teams in equivalent classifications above the high school level. I’m told Minnesota was without its senior quarterback. Given that the Gophers have a win on the year and apparently played USC close, he probably deserves some Heisman votes even if he doesn’t take another snap. It wasn’t so much that Minnesota made a lot of mistakes– they only had one turnover, which I predicted right before the play occurred– as that they just couldn’t function on either side of the ball, while Michigan seemed to gain an easy 8-10 yards on every play.

And thus Michigan improbably moves to 5-0. I want to say they aren’t as good as their record, but I’m really not sure anyone has a basis to say anything about them because, outside of the strange Notre Dame game, they really haven’t been tested. The next two weeks will provide that test, though, as they go on the road for the first time this season, first at Northwestern and then at Michigan State.

Look for ALDLAND to take you to a couple more Big Ten games this year, and maybe even another SEC game.

4 thoughts on “The Little Brown Jug stays in Ann Arbor”