The notion that anyone would have an expectation regarding the anticipated performance of the Detroit Lions so high it required public tempering is facially preposterous, especially considering that this is a team that made major coaching and administrative changes in the middle of last season and, going forward, will be without its generational talent, who opted for an early retirement over even one more game with this team.

Yet this is the time of every calendar year when Lions fans’ memories wane to their very shortest. Who’s Calvin Johnson? What’s coaching and management stability? We’ve got Jim Bob Cooter and Zombie Anquan Boldin!

I want the Lions to win every game, and I know that, each Sunday (/Monday/Thursday/Saturday sometimes/Tuesday maybe?), no team will look better on the gridiron than the Silver and Honolulu Blue Crew.

As recklessly optimistic as Lions fans may be at this time of year– which may be the happiest, relatively speaking, since they haven’t yet lost a regular season game– however, there are a few Coors Light Cold Hard Facts with which they need to reckon. 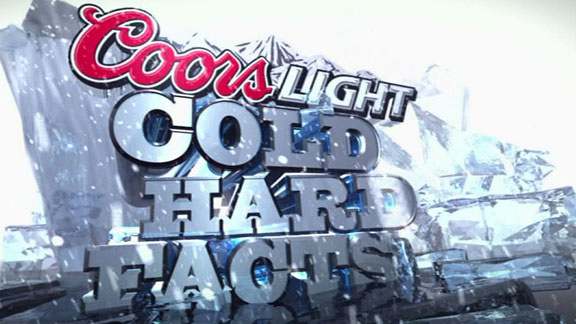 1. The offensive surge under Cooter likely was due, in part, to an easier second-half schedule.

I approved of Jim Caldwell’s decision to fire Offensive Coordinator Joe Lombardi and replace him with Cooter after the team opened the season with a 1-6 record, writing, at the time, one of those recklessly optimistic things Lions fans write:

This is precisely the move the Lions needed to make, and while it probably should have happened years ago, Martha Ford has signaled that, under her watch, her family no longer is willing to accept losing and will take an active approach to building a winner.

Once Cooter had the full opportunity to take the helm, following the Week 9 bye, the Detroit offense looked great, and the team went 6-2 down the stretch to salvage a 7-9 record. We were there at Lambeau, when the Lions won for the first time since 1991 in Wisconsin, thereby ending the longest road losing streak by any team against a single opponent in NFL history. We were there at Ford Field, when the Lions beat the 49ers in the final home game of the season. They even won on Thanksgiving! Sure, that home loss to the Packers was brutal, but the second half of last season was fun, and it all happened under the offensive guidance of JBC.

In addition to Cooter, this Cold Hard Fact also should temper our outlook on quarterback Matthew Stafford. I still firmly believe that the Lions would be foolish to part ways with their starting quarterback, but we now have clearer context for my note from December that “Stafford [was] among the most improved quarterbacks in the season’s second half.” That’s still true, but it’s difficult (for me, anyway) to isolate true player improvement from other dependent contextual factors, including a new offensive coordinator and weaker opponents.

2. The offense struggles without Calvin Johnson.

This statement is as obvious as it is readily ignored by Detroit fans, many of whom believe that Golden Tate’s production will remain consistent in Johnson’s absence, and that new Lions WRs Boldin and Marvin Jones, together with Tate, can replace Johnson. I hope they can, but Boldin’s age (thirty-five) and Jones’ numbers, which don’t look better than Tate’s, and his foot and ankle injuries that caused him to miss the entire 2014 season worry me.

The absence of #81 worries me most of all, though. Since 2009, the Lions offense has averaged 22.7 points per game. In games during that period they played without Johnson, however, they averaged  just 14.4 points per game. Again, this is a coarse-grained comparison devoid of any other context, but it’s one that suggests Johnson’s mere presence on the field has been worth about a touchdown a game for Detroit.

Thus concludes this two-pack of Coors Light Cold Hard Facts, which is not a six-pack because Lions fans already are overserved on the empty calories of preseason hope.

1 thought on “2016 NFL Preview: Tempering expectations for the Detroit Lions”